The History Of Videoconferencing 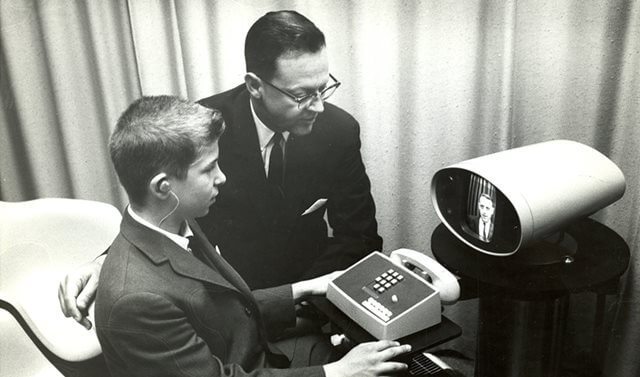 Videoconferencing has become an integral part of life in 2020. This is not just for work purposes too. Face Time, Skype and other video calling apps on smartphones allow family and friends to connect across the globe. It has become normal.

In 2020, in amidst the coronavirus crisis, videoconferencing has now also become an essential tool for work. So many people are working from home as offices have to remain shut. Employees are also not meeting face-to-face with each other or with clients. In order for business to carry on as close to normal as possible, videoconferencing has stepped up as the go-to option for meetings and catchups.

The idea of videoconferencing has been around for over 100 years now. Scientists started working on the concept of transmitting video over the wires at the same time as an audio signal. For a visual society, this seemed like the obvious evolution of the telephone.

It wasn’t until 1927, however, that the first actual experiments were conducted. These were done at Bell Labs as part of the AT&T Company. Officials in Washington DC were connected to the AT&T president in New York City. They had a two-way audio connection but only a one-way video connection.

Shortly after this, in the 1930s, scientists over in Germany began similar experiments. They managed to send still images along the phone wires and designed phones that were capable of receiving these images.

It was also around this time that the word “video” actually came into being. It was apparently coined in 1935. Before that, people used terms like “sight-sound television system” and “visual radio”. The term “video phone” only started getting used in popular vernacular in the 1950s. This was around the time when AT&T created their Picture-Phone prototype and made the first ever official video call that sent video and audio in both directions.

Over the next few decades, advances were made in the videoconferencing world. However, it never made its way into popular use because the technology simply wasn’t affordable or practical for regular use. This all started to change in the 1980s as the computer revolution took off.

Suddenly, more and more people were buying personal computers for use in their homes. It was also a lot more commonplace for people to have a computer on their desk at work. The rise of internet usage came next, along with webcams and broadband service providers.

In 1994, the first casino went digital and online Roulette NZ became available. Webcams also started becoming commercially available thanks to QuickCam. Now, it was finally viable for anyone and everyone to be able use videoconferencing software to talk to colleagues, clients, family and friends. In fact, the QuickCam was so instrumental in changing the way people used computers that it was named as one of the top devices for computers of all time by Time Magazine back in 2010.

Next up was the rise of the mobile phone. It wasn’t long before tech experts saw the value of adding a camera to the devices and allowing them to be used for videoconferencing.